Fashion and Politics are in an aerodynamic dance.

In the political world, one may blindly assume that fashion has no place, but I am here to highlight another perspective. Though subtle, and rarely spoken of seriously, fashion indeed, is deeply entrenched in the world of politics. In fact, fashion and politics are flanked together in an aerodynamic dance. Swaying back and forth, between the proverbial power suit, and business casual,  and back again to the downright funky informal. Here is where we squint and try to take a deeper look. In the gleam of the eye, you will see those subtle hints of jewelry, in the form of the patriotic flag pin, or some other pertinent political medallion.

Are Politicians too steeped in the world of politics to even think about fashion? No. I think not;  as it is clear that fashion is a very real part of politics, however subtle.  As we are now in an election year ( And what a year it is ) I can almost say with some surety that candidates are being judged for their fashion sensibilities.  Indeed if you took an honest look, Hillary lost to Obama Surely in part, because he simply out dressed her, the power pants suit was by far his territory. Again, now in 2016. Trump is doing the power suit dance. And doing it well. Hillary is missing the steps and at times stumbling a bit, and the beat goes on.

More and more these days, the political stage is swaying into a  faint fashion show, but no one will openly say so. Mark my words, though, one day, very soon the sounds of political fashion will be trumpeted, loud and clear. Fashion and politics will visibly move together, as in a dance of tango.  As we know, typically in the political world, the attention, as far as fashion goes, is reserved for the first lady. As we move, However, into a new political landscape. We will see some more exciting changes in men’s fashion, What once was out of the question for the soberly dressed man in the political arena, will soon become an acceptable consideration; and the focus will be placed equally on the President and or the First Gentleman.

Consider, now, for example, the formal dress of the American Samoa Island. { The American Samoa Islands are US Territories in the South Pacific Seas } It is a Kiltlike garment, worn in business and formal events. The business garments are adapted to imitate the typical suit, but instead of trousers, its skirt or kilt like. ( Here we call it a Manche ) They call this garment an Ifaiana or Avalava.  ( see video ) The political future of men’s fashion is in the proverbial changing room, and the political stage will become a lit with men’s fashion taking on very exciting tones. 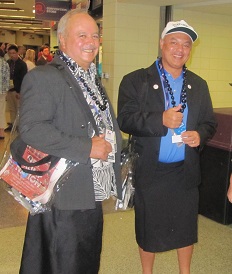 Here at A Man dressed we are poised to set the stage, and participate in the twist and turns of the political fashion dance.

Thank you for stopping by, please come again and let us know what you think.Leave a comment or two below.