Men’s Fashion as the acamidt awards 2016

The academy awards are the ball on fashion, but especially for women. It’s  amazing to see how eager, and intently we all stay tuned to the pre-oscar red carpet moment, to see the women in their who is who of designer’s creations. Each year the gowns highlight the designer with the most unique, visually appealing and memorable silhouette draped on the beautiful vixen. The men, in contrast, stands in the shadow of the starlets.  This year 2016. However, I was pleased to see Kavin Hart dashing in his dazzling sequence tux, so lovely; that finally it warranted the ( it ) question. ” And who are you wearing, to which he show fully answered Dolce & Gabbana. Later Chris Rock; hosting the awards mentioned how stunning the women were in their variation of magnificent gowns and added: “I can’t say a thing about the fellows, as you are all wearing the same damned thing.”.This is what we have been talking about on A Man Dressed. 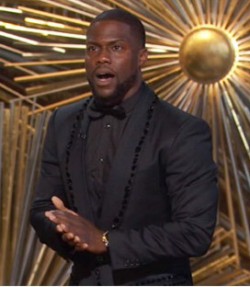 It is just what we have been talking about, and now you can see and hear more often that people are now waking up to the far too long unspoken truth about the visceral stagnation of men’s fashion. You can see little by little that changes are being made. Sure we have seen past a few interesting tux is worn by men on the red carpet, but not before now has its teamed with mention of the monotony in men’s formal attire.

In the not distant future, we will be seeing such variety of formal and none formal designs for men, stunning and memorable and made for men, just like the classic suit and tuxedo. All in a none competitive, but a complimentary fashion to the women on the red carpet moment.

Please leave a comment. Tell us what your thoughts are on this topic. Where do you see men’s fashion on red carpet moments in the future?